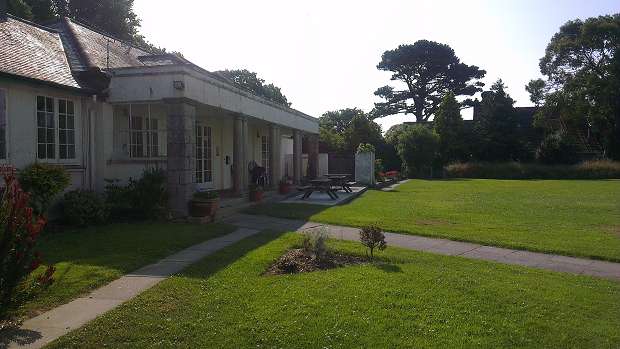 Falmouth Sports Club was established in 1886 as The Falmouth Club and was originally located in town on Market Street.

Housed in buildings more recently occupied by Bratts haberdashery and surf clothing retailer, Ann’s Cottage, it was a Gentlemen’s Club for the professional and well to do of the town.

In 1924, the Carne family who owned the Green Lawns Hotel on Western Terrace, leased an area of land for the creation of tennis courts and a clubhouse which became The Falmouth Lawn Tennis Club.

The club prospered and in 1928 the freehold was purchased. In total, there were nine grass courts consisting of seven doubles courts, a sunken court (now occupied by Westover Surgery), and two singles courts which were a rarity for their time.

The arrival of squash

In 1933 the club built a squash court which was the first in the South West. In order to do this, the club lost one doubles court and the two singles courts. The name was also changed to the Falmouth Squash and Tennis Club.

The clubhouse was re-built using the classic architectural features of the original building including the granite pillars that stand on the clubhouse veranda today.

In the 1940s two grass courts were laid to tarmac and in the early 1950s a second squash court was added. After World War II for a number of years open tennis tournaments were held at the club which attracted players as far afield as Kent and were of a high standard. It was not unusual for up to 100 spectators to watch the finals.

Social highlights of the year included a ball, marking the end of the tennis open tournament and a New Years Eve ball; both were formal dress and tickets always sold out.

Around this time there were two bars, one which still exists today and another where the gymnasium and office are now situated. A grand piano sat in the main room where members would gather around for a sing song, some were very good pianists.

In the early 1960s club membership figures increased overnight as Pendennis Tennis Club on Woodlane closed. This was a great boon for the club while it struggled financially.

Despite this celebrated reprieve, the club fell on hard times and consequently sold the sunken tennis court land to cafe owners from Falmouth; the bungalow they built is now Westover Surgery. Sale proceeds allowed the club to install central heating throughout the clubhouse.

The two decades that followed saw an upturn in racket sport popularity and during the 1970s three new squash courts were constructed immediately behind the clubhouse. By the early 1980s four hard tennis courts were in play, much as they are today.

The original squash courts situated at the lower end of the club site are now used by Swamp Circus and Sandokai Karate. The club changed its name once more to its current name, Falmouth Sports Club. Sports Council grants awarded in the 1990s provided the club with funding for floodlights on two tennis courts.

Falmouth Sports Club has secured £49,000 of Olympic legacy funding from Sports England’s Inspired Facilities Fund. This will allow us to lay new squash court floors and re-plaster the walls, modernise the changing rooms and showers, install a new boiler, and create a secure storage area for members.

Looking ahead, we anticipate these changes will create an even better experience for our members and those considering squash or racketball as a new sport. We will also continue to strive at creating a club that remains inclusive to players of all abilities who love their sport and have fun while playing it.

Specialists in Domestic Appliances and Servicing